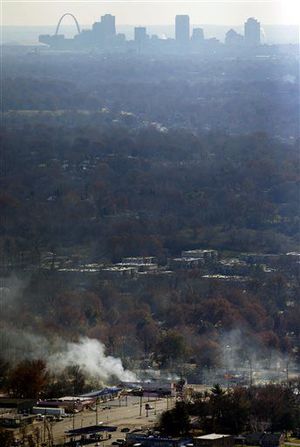 As reported by the St. Louis Post-Dipatch:

ST. LOUIS • The city will soon appoint a dedicated officer funded by the Rockefeller Foundation to help address challenges of civil unrest and crime.

St. Louis was named as one of 35 cities across the globe to participate in the “100 Resilient Cities Network,” joining 32 others already in the program. The announcement was made on Tuesday night at an event in Singapore.

The ambitious program aims to help cities and urban strongholds “prepare for, withstand and bounce back rapidly from shocks and stresses.”

The foundation, founded in 1913 by oil magnate John D. Rockefeller, is one of the largest private philanthropic organizations in the world, with an endowment topping $3 billion. St. Louis was one of 372 cities around the world to have applied for the foundation’s Resilient Cities program, but only 100 will be selected over time.

The foundation will pay the salary for a “chief resilient officer” for two years at St. Louis City Hall. That person, who will be hired after a search, will help connect St. Louis to cities facing similar challenges as well as aid them in finding and directing resources. No salary figure has been set.

The employee also will help develop an action plan to deal with whatever the city identified as its biggest challenge, which in St. Louis’ case involves endemic crime and civil unrest.

“We are thrilled that, through the Rockefeller Foundation and our sister Resilient Cities, the world will be taking a hands-on interest in strengthening St. Louis,” said Mayor Francis Slay. “The invitation comes at a time of historic opportunity for broad and lasting social progress in our city.”

Cities from across the world are asked to label their biggest potential “shocks and stresses” when they apply. For example, New Orleans has an officer dealing with the challenge of tropical storms, and Ramallah, the Palestinian city in the West Bank, has an officer challenged with issues of conflict and climate.

St. Louis’ application referred to the recent racial unrest in the wake of the shooting death of Michael Brown by a Ferguson police officer. It identified endemic crime and potential civil unrest and riots as its top stresses and shocks. Other stresses included insufficient educational infrastructure, declining population and aging infrastructure.

“A major and protracted event of civil unrest or rioting in the city of St. Louis could radically alter, weaken and delay the city’s prospects for continuing revival and revitalization,” the city wrote in its application. “The risk of civil unrest/rioting is connected to the greatest existing or imminent stress, endemic crime and violence, in the sense that, in the absence of a strong program of resilience, both implicate on the city’s ability to project and preserve its status as a strong, diverse, culturally rich, optimistic, steadily improving place to live, work, play and invest.”

The program’s chief mission is urban resilience, which it defines as the “capacity of individuals, communities, institutions, businesses and systems to survive, adapt and grow no matter what kinds of chronic stresses and acute shocks they experience.”

“Cities are learning that by building resilience, not only will they be better prepared for the bad times, but also life is better in the good times, especially for the poor and vulnerable,” said Judith Rodin, the president of the Rockefeller Foundation. “It’s smart investment, and yields a resilience dividend that is a win for everyone.”