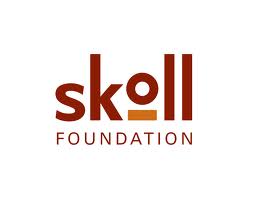 “Through the generous support of Jeff Skoll and the Skoll Foundation, we look forward to supporting brave documentary, narrative, and new media artists working to improve the world around them through storytelling,” said Sundance Institute executive director Keri Putnam. “The evolution of this collaboration will build on the greatest strengths of the existing program, increase its reach, and enable us to bring vital independent stories to broader audiences.”

“Sundance Institute, as led by Robert Redford, is a leading voice for independent storytelling and whose community of world-class storytellers share with Skoll a deep commitment to highlighting injustice and shining a light on solutions to the world’s most pressing problems,” said Skoll Foundation president and CEO Sally Osberg. “We’re proud and excited to expand our support to broaden the reach of these stories and their potential to help us envision and work toward a better world.”

For more information see (and where reported): http://philanthropynewsdigest.org/news/skoll-foundation-awards-2.5-million-to-sundance-institute[/vc_column][/vc_row]