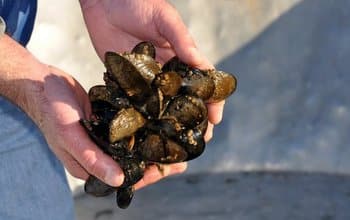 The mortality of larval Pacific oysters in Northwest hatcheries has been linked to ocean acidification. Yet the rate of increase in carbon dioxide in the atmosphere and the decrease of pH in near-shore waters have been questioned as being severe enough to cause the die-offs.

Now, a new study of Pacific oyster and Mediterranean mussel larvae found that the earliest larval stages are sensitive to saturation state, rather than carbon dioxide (CO2) or pH (acidity) per se.

Saturation state is a measure of how corrosive seawater is to the calcium carbonate shells made by bivalve larvae, and how easy it is for larvae to produce their shells. A lower saturation rate is associated with more corrosive seawater.

The scientists used unique chemical manipulations of seawater to identify the sensitivity of saturation state for larval bivalves such as mussels and oysters.

Results of the study, which was funded by the National Science Foundation (NSF), are reported this week in the journal Nature Climate Change.

“Biological oceanographers have speculated that early life stages of marine organisms might be particularly sensitive to ocean acidification, but the underlying mechanisms remain unknown for most species,” says David Garrison, program director in NSF’s Division of Ocean Sciences, which funded the research through an ocean acidification competition.

NSF’s Directorates for Geosciences and for Biological Sciences supported the ocean acidification awards.

“This research is an important step,” says Garrison, “in being able to predict, and perhaps mitigate, the effects of ocean acidification on coastal resources.”

The findings help explain commercial hatchery failures, and why improving water chemistry in those hatcheries has been successful.

“Bivalves have been around for a long time and have survived different geologic periods of high carbon dioxide levels in marine environments,” says George Waldbusser, an Oregon State University (OSU) marine ecologist and biogeochemist and lead author of the paper.

“The difference is that in the past, alkalinity (the opposite of acidity) levels buffered increases in CO2, which kept the saturation state higher relative to pH. In the present ocean, the processes that contribute buffering to the ocean cannot keep pace with the rate of CO2 increase.

“As long as the saturation state is high, the oysters and mussels we tested could tolerate CO2 concentrations almost 10 times what they are today.”

The idea that bivalve development and growth is not as linked to CO2 or pH levels as previously thought initially seems positive.

However, the reverse is true, Waldbusser says.

Larval oysters and mussels are so sensitive to the saturation state (which is lowered by increasing CO2) that the threshold for danger will be crossed “decades to centuries,” says Waldbusser, ahead of when CO2 increases (and pH decreases) alone would pose a threat to bivalve larvae.

“At the current rate of change, there is not much more room for the waters off the Oregon coast, for example, to absorb more CO2 without crossing the threshold,” Waldbusser says.

The study builds on previous research by Waldbusser and colleagues that outlined the mechanisms by which young bivalves create their shells after fertilization.

The researchers found that young oysters and mussels build their shells within 48 hours to successfully begin feeding at a rate fast enough to survive, and that the rate of shell-building required significant energy expenditures.

In the presence of acidic water, the oysters and mussels had to divert too much energy to shell-building and lacked the energy to swim and get food.

“The hatcheries call it ‘lazy larvae syndrome’ because these tiny oysters just sink in the water and stop swimming,” Waldbusser says.

“These organisms have really sensitive windows to ocean acidification–even more sensitive than we thought.”

In the current study, the researchers used high-resolution images to analyze the development of oyster and mussel shells.

They found that the organisms–which are about 1/100th the diameter of a human hair–build a complete calcium carbonate shell within six hours, about 12 hours after fertilization.

Alter the ocean chemistry just a bit, however, and a greater proportion of the shells do not develop normally.

The ones that do are smaller, leading to potentially weaker organisms that take longer to get to a size where they can settle into adult life.

“When the water is more saturated and has greater alkalinity it helps offset higher levels of carbon dioxide, ensuring that shell formation can proceed–and also making the shells bigger,” Waldbusser says. “This can have a significant effect on their survivability.”

The National Science Foundation (NSF) is an independent federal agency that supports fundamental research and education across all fields of science and engineering. In fiscal year (FY) 2014, its budget is $7.2 billion. NSF funds reach all 50 states through grants to nearly 2,000 colleges, universities and other institutions. Each year, NSF receives about 50,000 competitive requests for funding, and makes about 11,500 new funding awards. NSF also awards about $593 million in professional and service contracts yearly.