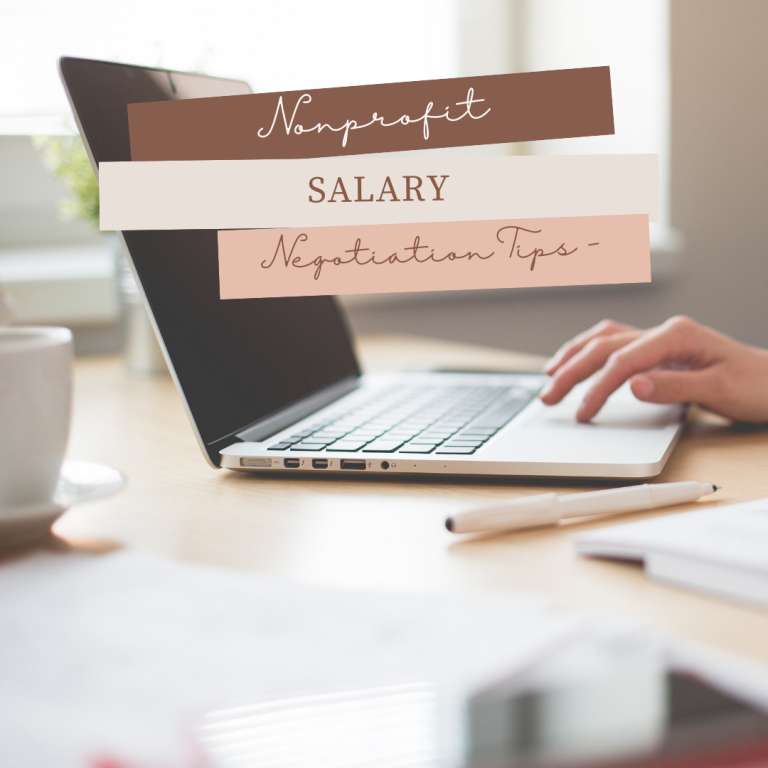 When negotiating your nonprofit salary, it is first important to consider where you are applying. When it comes to salary negotiation most finalists (for jobs) concentrate too much on the market, and their own experience level. Though both of these items are most important to us (as the job seeker or staff member), they are not the most influential aspect controlling nonprofit job salaries and offers. The most telling and confining aspect is the workplace salary culture and salary levels of the current employees at the foundation or nonprofit, and their established budget. A good step in making the best decision on the best salary to ask for is to consider what they are offering for other positions they are recruiting for, and consider their overall culture before you decide on a number.

Nine times out of ten, when it comes to the salary that a nonprofit organization decides to offer, they base it on the realistic span they can offer for the position as it relates to (1) their budget for the position and (2) the other positions and staff they already have in place. So, if the organization is currently paying under market for their current staff members, you should also expect your offer to be the same unless you bring significant additional established value or expertise to the organization.

Organizations are always trying balance the responsibilities of the position and the pay offered, but many times feel that they can not offer what is required because to do so would also require them to increase salaries for everyone in the department or organization, which would put a large dent in their established budget.

There are many useful salary surveys of the nonprofit sector that exist, but in the end these numbers give us very little guidance because they are a rough outline. It is highly suggested to research the position and job title you are applying for. Candid and as well as online portals such as Linkedin or Glassdoor can be of great help to determine average salaries for your position and location.

Here are some rules to follow when figuring out what nonprofit salary to ask for:

(1) What was your last salary? Generally it is a best practice to not ask for more than 15% more than this number unless the position caries significant more responsibilities and you can justify it via your past experience.

(3) Always say you are flexible. Giving a hard line number can make you look like you do not want the job, and is a red flag many times for hiring decision makers.

(4) It is OK to ask what the salary range is. You may need to politely ask in order to know if your specific salary needs are realistic. Never ask this question until they bring up the topic of what salary you are seeking. Asking this too early is a big turn off for a prospective employer that may not yet know if they are interested in you. Also, in many states it is a legal requirement that they tell you the range if asked. But do it with poise and professionalism for best results.

(5) After you give the number explain why you need it, but just briefly. Here is an example of a good way to describe your salary needs: “In my last position I made $44,000 plus benefits as the Office Coordinator. Because I will now working as an Executive Assistant, I am hoping to gain a base salary of $55,000 to $58,000 to meet living expenses. Of course, I am also flexible and open to negotiations depending upon the exact offered position.” This example also works very well for higher level positions.  First establish your value by telling them how much you made in the past, and then professionally tell them what your expectations are. Make sure the salary you suggest is not too far out of their goal salary span. Also, keep in mind that most employers will only hear the lowest number that you offer in your desired salary range. Thus, never say a number you are not willing to accept later.

(6) The final guideline is to never ask for too much. Asking for to high of a number can backfire. Once you ask for too much, there is no way to later accept 20% less. In the view of the organization and hiring decision maker – the jobseeker will really only be content with the salary they suggest the first time around. If you later say that you would take much less, it will cause them to suspect that if they hired you at the lower salary you would not be content in your position, and would eventually end up leaving. So, do your research, suggest a number that is realistic, and be flexible. In the end, if they make you an offer, most of the time it will be made within five percent of the lowest number that you suggest. The bottom line is to not be greedy, because it’s a sure fire path to not receiving that job offer at all.

(7) Please keep in mind that in many states in the US it is not legal for nonprofit employers to ask what your current salary is. Understanding if the organization you are interviewing with can ask for your salary history is important to consider. If you salary was high in the past, it could benefit you to volunteer salary history to better establish your value and nonprofit salary expectations. That being said, these new laws many states are enacting are also there to protect you! Thus, if you have been underpaid in the past these law can help you to only provide what you are seeking in your next role.

Summation: Be honest, thankful, passionate and kind in the way you explain your salary exceptions for best success. Also, mentioning you are flexible for the right opportunity, that money is not your most motivating factor, and you are very excited about the potential of working with the prospective employer are all good things to consider sharing if it represents your position. It is also advisable to let the potential nonprofit employer the base number you would 100% require to be able to consider the role. But keep in mind if you provide a range for the salary you are seeking most employers will only hear the lowest number you mention. Thus, put thought into what you ask for prior to the interview for best results.

Nonprofit Resume Tips; How To Create A Readable Resume